Our laboratory focuses on developing novel single-molecule tools in single cells to study the structure, function and dynamics of macromolecular assemblies. For example, we developed single-molecule gene expression reporting systems and chromosomal DNA conformation markers to probe the dynamics of gene regulation and transcription in bacterial cells. We also pioneered the use of superresolution imaging to probe the bacterial cell division machinery. Recently we expanded our horizons by collaborating with experts of different fields in biology to map the spatial organization of the genome and epigenetic markers of single human cells, and to develop new single-molecule based technologies for sensitive early detection of cancer markers in blood samples. Four major research directions are detailed below.

In bacteria, cell division is carried out by a highly conserved supramolecular complex, the divisome. Understanding the structure and function of the divisome is important for developing new antibiotics. Central to the divisome is a ring-like structure formed by the essential FtsZ protein, named the Z-ring. The Z-ring recruits all other divisome components, and possibly generates a mechanic force to constrict the inner membrane. However, it has been difficult to probe the in vivo structural organization of the Z-ring because of its small size and highly dynamic nature. We made our first major contribution to the field by illustrating the structural organization of the Z-ring in live E. coli cells using single-molecule based superresolution imaging. The structure provides an important foundation to understand how different components of the divisome are assembled and coordinated to carry out cell division. Next, we showed that there exists a multi-layered protein network residing in the cytoplasm, physically connecting the Z-ring to the chromosome to stabilize the Z-ring and coordinate cell division with chromosome segregation. Most importantly, we provide substantial evidence to demonstrate that, in contrary to the common belief, the Z-ring is not the major constrictive force generator. 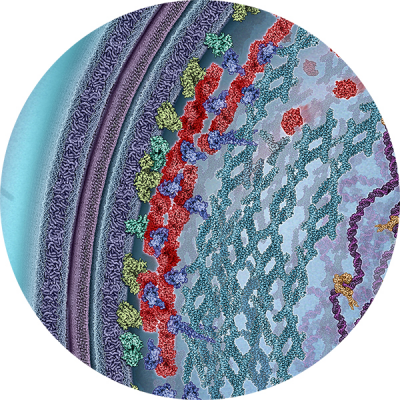 Instead, septum closure rate is limited by cell wall growth, and further modulated by nucleoid segregation. Furthermore, we recently discovered that the Z-ring dynamically treadmills along the division plane.  Treadmilling is the apparent movement of a polymer by the continuous polymerization at one end and depolymerization at the other end, with each individual monomer remaining stationery during the process. We found that Z-ring’s treadmilling dynamics is powered by FtsZ’s GTPase activity, and guides the spatiotemporal distribution of cell wall synthesis machineries so that a symmetric, smooth septum and consequently two hemisphere new cell poles could be built in a circular motion.  Our work redefines the role of the Z-ring in bacterial cell division, and promotes a new, holistic view of the divisome. 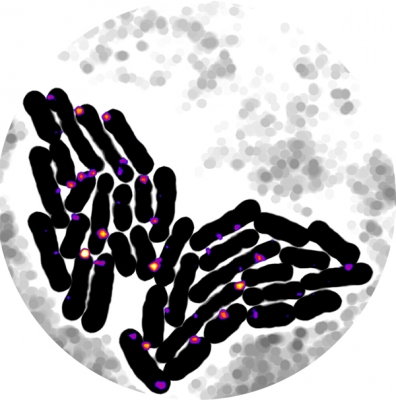 insic noise using autoregulatory transcription factors, we developed a single-molecule gene expression reporter to monitor the stochastic expression of a transcription factor and its autoregulatory actions. We discovered that intrinsic noise has negligible effect on the overall gene expression noise. Instead, extrinsic noise, or fluctuations caused by different compositions of cellular factors in different cells, dominates noise in gene expression. Consequently, cells use negative autoregulation to counteract extrinsic noise in order to achieve a homogenous gene expression level. We recently further developed a new strategy  to monitor simultaneously the correlative expression dynamics of two transcription factors in live cells, both at the single molecule level. This ability has not been possible before. The new, dual single-molecule reporter system allowed her to uncover two new cell fate potentials that were hidden in a classic bistable switch, which is a common building block of gene regulatory networks, and traditionally is viewed as only capable of directing two mutually exclusive cell fates. We experimentally mapped the corresponding potential landscape and switching kinetics between four different gene expression states, offering first-of-its-kind insight of how cells could encode multiple cell fates even with a limited circuitry to allow a high degree of adaptation and differentiation. These new findings significantly advance our understanding of the operational principle of gene regulatory networks.

Spatial organization of genome and transcriptome 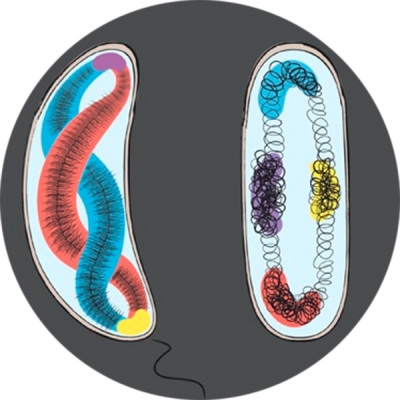 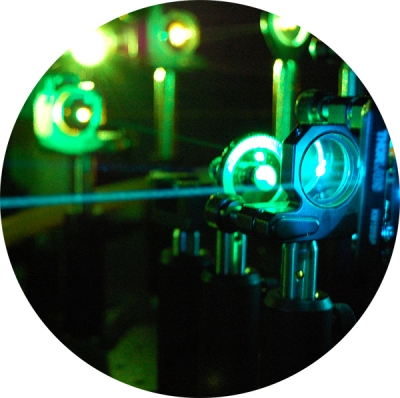